Usually, the sauce for butter chicken is loaded with butter and cream, but this version uses coconut milk, as it is a dairy free alternative. Coconut Milk and Coconut Oil help to give this dish a creamy luxurious texture, further complimented by the use of ripe, fresh tomatoes. Sometimes canned tomatoes can taste quite acidic and by creating our own tomato base in this recipe, we can avoid that happening.

We used the classic round variety,which are very versatile, and an economical choice when preparing tomato sauce like in this recipe. 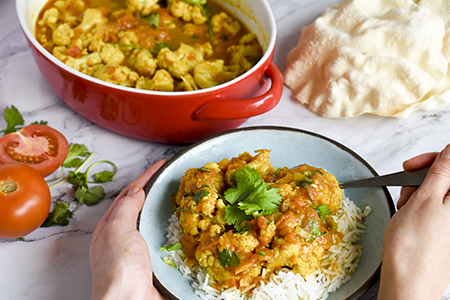 Begin by removing the skin of your tomatoes. To do this, drop them into a pot of boiling water using a spoon.After about 30 seconds, remove from the boiling water and skins should peel off very easily in a bowl of cool water. Chop the tomatoes roughly and set aside.

Set your oven to grill at 200c and line a baking tray with baking paper.

In a bowl, combine the cauliflower with 1 tbsp. of coconut oil (melted) and a few tbsp. of your coconut milk – you just need to ‘wet’ the cauliflower. Now using your hands,rub in half of your grated ginger and a ½-teaspoon of salt and pepper. Leave to soak up the flavours for 10 minutes or so.

While this is happening, heat remainder coconut oil in pan and fry your spring onions until brown. Now add the remaining ginger, sugar and spices and cook for another minute or so.

Then, add your chopped tomatoes and around 1 ½ cups of coconut milk (basically half).

Remove cauliflower from oven and add to the pan. Bring the sauce to boiling point and then reduce heat and cook until cauliflower is soft. If the sauce gets too thick, add remainder coconut milk to thin out.

Remove from the heat and stir in the coriander, season with salt and pepper according to taste, serve over bowls of rice and enjoy!