" ZZ2 aims to be the benchmark of success in agriculture and to create sustainable value for all its stakeholders as a living, open system." - ZZ2's Inspiration.

The ZZ2 brand is used to describe the extensive agricultural activities of Bertie van Zyl (Pty) Ltd, which originated in the Mooketsi Valley in Limpopo 110 years ago. Today, the ZZ2 Group consists of a conglomerate of companies and operations operating nationwide and in Namibia.

The brand has become known for the cultivation of tomatoes over decades, but expansions in high-value products such as avocados, cherries,blueberries and almonds are increasingly being undertaken. ZZ2 also grows onions, apples and pears in the Western Cape. Dates are cultivated in southern Namibia.

ZZ2's workforce of approximately 10 000 people is multi-cultural where production, packhouses and the marketing teams work closely with specialists such as agronomists, engineers and artisans. The company is supported by an integrated human resources department that manages training,career development, administration, nursery schools, clinics, housing and employee transport. A team of accountants, IT specialists, financial and administrative staff supports the Group's operational and corporate governance management team. Eight technologically advanced cooled packhouses are operated to meet customers' needs nationally and internationally.

In the last two decades, ZZ2 has partnered with local and international organisations and businesses who have added value to the internal converters of production, packaging and marketing. ZZ2 holds a stake in an international seedling nursery, an online fresh produce trading platform, afresh produce distribution depot, biological compost production and a biological insect and plant protection laboratory. Other partnerships include a date farm in Namibia, a partnership to expand avocado and macadamia plantings,guidance and support of trust and expropriated land, cherry genetics and a plant tissue culture laboratory.

ZZ2 was built by the Van Zyl family into a leading farming enterprise in South Africa and internationally.

The quest for independence and a passion for farming come a long way in the Van Zyl family. In 1702 Willem, the Van Zyl ancestor, worked as a gardener for the Dutch East India Company in the Cape of Good Hope. He lost his job because of insubordination and bought his own farm in Franschhoek.

The descendants of Willem left the Cape and gradually moved north until they settled around 1880 in the area east of Polokwane.

The period after the Anglo-Boer War was difficult for the Van Zyls. They lost their farm and lived as share-croppers and made a living as construction workers on the railway line linking Polokwane and the African East Coast. In 1908 they moved further east to the Mooketsi area. They first bought a portion of the farm Boekenhoutbult and eventually the whole farm.

After the Anglo-Boer War, the government of the day required farmers to register a brand for their cattle. The brand, ZZ2, was awarded to the Van Zyl family, hence the brand name used to date.

Burt van Zyl died in 1923 and his son Flip and grandson Jimmy,continued to farm with potatoes. The completion of the railway line contributed to the distribution of their products. On the potato bags, the brand name, ZZ2, was applied in red with a branding iron.

Bertie van Zyl was born in 1932. He left school at the age of 16 and started farming due to his father's ill health. Bertie soon realised that his neighbour made more money than he did by planting tomatoes. In 1953 he harvested his first successful tomato crop.

In 1961 he bought Boekenhoutbult from his father and his tenacity, excellent business sense, belief in himself and ability to communicate with labourers stood him in good stead over the years. In 1965, the private company, Bertie van Zyl (Pty) Ltd, was registered.

The farming enterprise grew rapidly and in 1967 he brought his younger brother, Flip, into the business with shareholding, effectively the start of the ZZ2 family business. In the 1960s, they started to farm with livestock and in 1981 the first 50ha of avocados were planted. Tomatoes were planted on economies of scale.

The first farms closer to Polokwane were bought in 1969.Two years later, 1 million boxes of tomatoes were packed for the first time.During the late 70s and early eighties, Bertie undertook extensive study tours to Israel, the Netherlands, Germany, Austria and the USA. These external influences led to improved and advanced practices and technologies. Water management, the critical component of ZZ2's pursuit for sustainable farming,was expanded extensively.

In 1980, the company appointed its first board to improve corporate governance. Four years later, ZZ2 traded 42 000 tons of tomatoes, 1 500 tons of potatoes and 200 tons of avocados. The increase in production forced ZZ2 to start its own transport division, which was expanded to a fleet of 65 trucks. By now, ZZ2 already employed 3 000 people,including a number of professional specialists.

In the early 1990s, ZZ2 expanded to Ceres in the Western Cape,where apples, pears and onions are cultivated up until today. The farms are managed as ZZ2 Ceres. During the same period, ZZ2 further expanded their operations in Limpopo.

In the mid-1990s, a retired Professor of Philosophy, Prof. Freek Engelbrecht, was appointed as an advisor to ZZ2. He introduced the open, living system philosophy to ZZ2, which was accepted as a business principle. This new way of thinking, shifted the focus from short-term shareholder profits to longer-term value creation for all stakeholders. The philosophy lent itself well to the farming environment because of the dependence on nature and its cycles.

The late 1990s and early 2000 were challenging for ZZ2. Not only did Bertie's health deteriorate, but ZZ2 also came under unreasonable pressure from apostate ANC politicians, something that was later resolved by the then Premier of Limpopo and by an intervention from the late Nelson Mandela. Another disaster struck ZZ2 when floods hit the Lowveld and washed away all the dams that were essential for tomato production. To pay for rebuilding of the dams, the bulk of ZZ2's herd was sold.

At the turn of the century (2000), ZZ2 had grown from an average agricultural business to a super family-owned business. This growth was due to Bertie's outlook on life and perseverance. By now, ZZ2 traded 110 000 tons of tomatoes, 20 000 tons of onions and 10 000 tons of apples and pears and 2 000 tons of avocados.

From a corporate governance perspective, the final turning point in ZZ2's history as a family farming enterprise to a family-owned business system took place in 2001. Tommie van Zyl was confirmed as CEO and a chartered accountant, WE Johnson, was appointed chairman of the board. Modern agricultural practices, such as those studied in Mexico and Israel, were increasingly applied.

In the first decade of the new millennium, ZZ2's management teams were integrated to embrace the open system. Highly skilled senior managers were appointed to support the three generations of the Van Zyl family on operational and board level.

Simultaneously the concept of Nature Farming (Natuurboerdery) was developed. The use of plant protection and nutrition focused on biologically-based products broke the deleterious effects of industrial farming. International research was used to establish Natuurboerdery which led to increased production and improved farming practices over the last two decades.

Bertie died in 2005. He stayed in his home on the farm Boekenhoutbult until the end. The open, living system was expanded by Tommie. He appointed systems philosophers Erik and Dieter Holm (both retired professors) to the board. In 2013, Johan Koorts, took over as chairman and top management was gradually integrated into a horizontal interactive team.

ZZ2 believes in the natural market forces of supply and demand determined by the national fresh produce markets. With the client's needs always taken into account first, value is added through quality assurance; packaging and distribution to the markets and supermarkets.

Currently, ZZ2  is trading 166 000 tons of classic round tomatoes and 10 000 tons of specialty mini-tomatoes. Avocado production will exceed 12 000 tons this year and is set to grow exponentially in coming years. 85% of the avocado crop is exported, mostly to Europe. Other products are 13 000 tons of onions, 8 000 tons of deciduous fruit, which are also mostly exported, while dates, cherries, almonds and blueberries are also in production and are set to grow in future.

In total, 209 000 tons of fresh produce are currently packed and marketed annually, making ZZ2 one of the largest companies of its kind nationally and internationally. 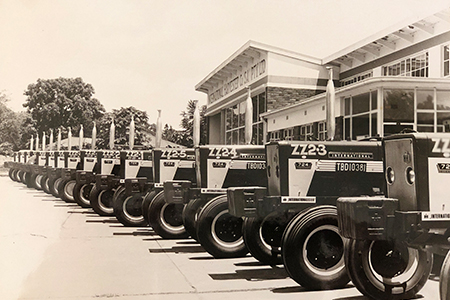 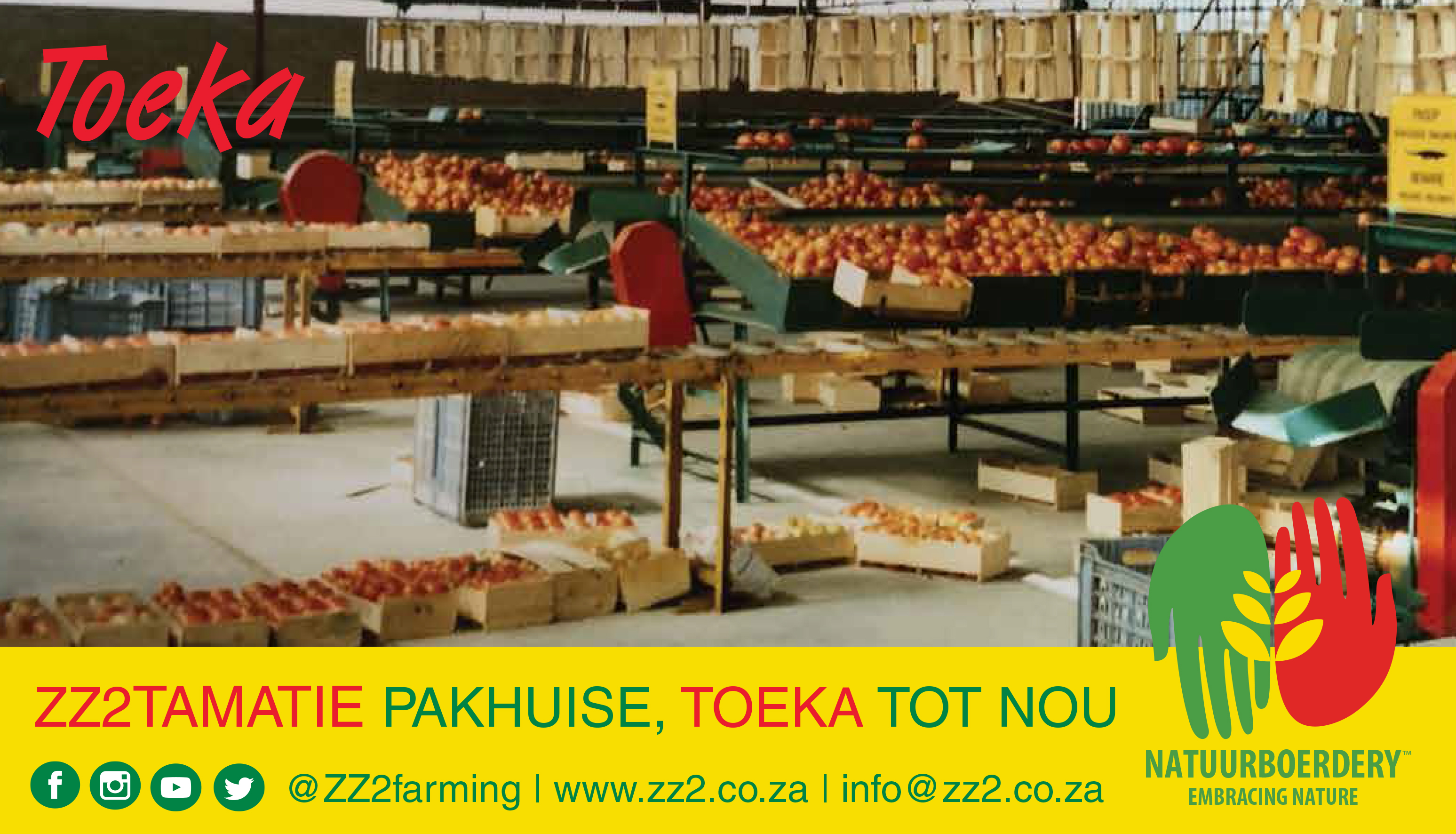 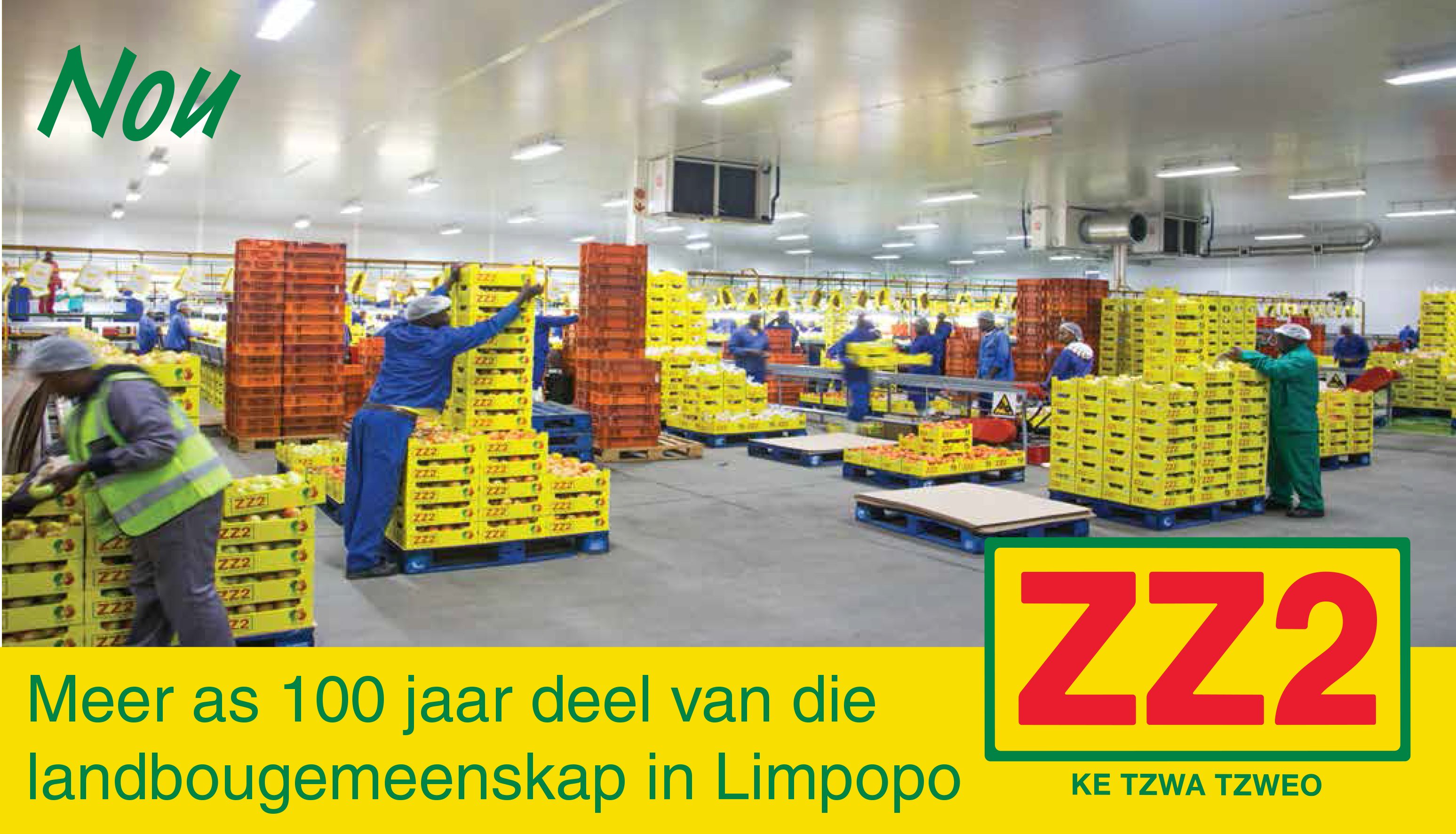