On Saturday, 24 June, the annual in-house Youth Show was hosted by Agri-Merensky at Merensky High School. 23 Learners were eager to prove their knowledge and showmanship concerning animal husbandry. After completing a written test, they were tested on cleaning and grooming the cattle. They were judged on their showmanship in the ring by Pieter Gerber and Willie Stevens. In the junior category Phillip du Preez took first place. Runner-up was Luandie Visagie, with Charize Taylor in third place. The seniors had a tough battle, but Iszabella le Roux came out on top, followed by Timothy Venter2nd and Nicky Smith 3rd. This was in preparation for the annual Letaba Youth Show in August and the nationals later this year.

All the cattle used during the show were sponsored by ZZ2. 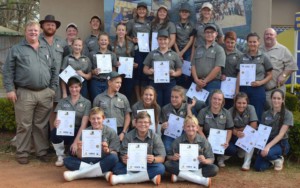