ZZ2 recently hosted a group of 15 young Austrian Pinzgauer farmers. Being the next generation it is important for ZZ2 to maintain and strengthen the strong existing ties between ZZ2 as a breeder of Pinzgauers and Austria where the Pinzgauer originated.

During the visit they attended a mini farmers day at Grootboom where they received short lectures on the ZZ2 livestock division’s operations; breeding selection and criteria as well as predators and natural dangers the Pinzgauer has to endure in Africa. They also had a demonstration of dehorning, branding and tatooing. Later the afternoon the manager of ZZ2 livestock division, Paul Bester, showed them around the fields where the cattle were grazing and in the process thy viewed 2000 head of cattle. It was very special for them to drive on bakkies into the mountainous part of Lorna Dawn with its wonderful panoramic views and dense vegetation where the cattle occasionally graze.

Apart from the livestock department they also visited some of ZZ2’s nethouses, open tomato fields, the compost facility, Bloemtuin Concervancy, avocado nursery, avocado packhouse, technical department and workshops as well as our avocado orchards in Olyfberg.

Another goal of the visit was to expose these young people to tourist attractions in South Africa – especially in our part of the world. They visited Elephant Whispers – in which ZZ2 is a partner- in Hazyview where they learned a lot about the African elephant and the challenges that it faces in Africa. On the way to ZZ2 they visited Graskop (pancakes for lunch!), God’s Window and the Blyderiver Canyon – the third largest canyon in the world but the largest green canyon. They also spent a night at Kapama Game Reserve where they were priviledged to see 4 of the Big 5 in the two game drives they undertook. There also was a special cultural day where they visited the homestead of the Modjadji Rain Queen, the Modjadji Cycad Forest and enjoyed a traditional lunch with traditional dances at a shebeen in Kgapane. Of course the largest baobab tree in the world was also visited! A defenite highlight on the itenerary was the canopy tour at Magoebaskloof Adventures where they impersonated Tarzan and Jane! Being mostly milk farmers and Catholics they also enjoyed the visit to Wegraakbosch Organic Dairy near Haenertsburg as well as the Easter service at the Catholic church in Haenertsburg. Lastly the Union Buildings and the Voortrekker Monument were good to visit on their way back to OR Tambo airport.

In the words of Anna Schmiderer, one of the young Pinzgauer-lovers, the tour was fascinating, extreme and unforgetable. According to her South Africa is certainly a wonderful “heimat” for the Pinzgauer! 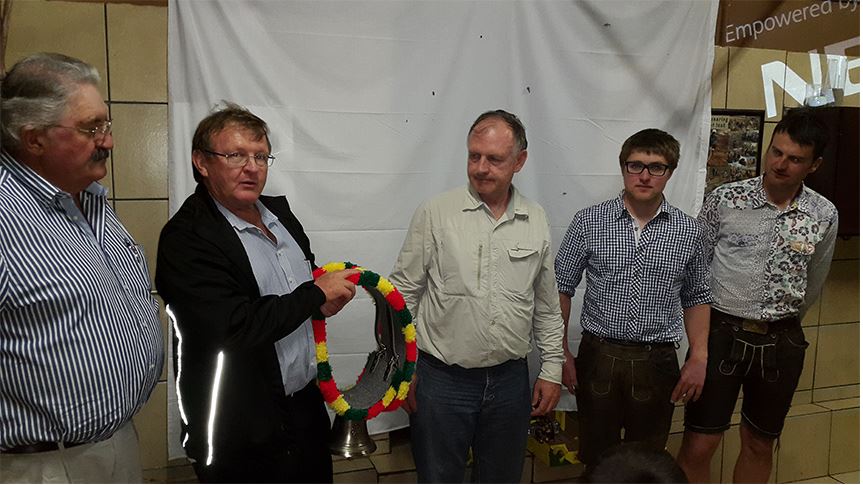