When Vito Rugani, managing director of Greenway Farms along with partner Vincent Sequeira, could take a step back from the day-to-day running of their large-scale carrot production, as a generation of younger management had come in, he devoted a year to researching an idea he had for their second grade carrots. “In 2011 I started looking at academic papers. I wanted to get a process that’s at least 20 years ahead,” he says, and he found it in the work of a professor from the University of l’Aquila in central Italy who had designed an extraction process through which as much as 50% of a carrot can be converted to clear juice, primarily by rupturing the cell walls.

Nowhere in the world had this design yet be converted to praxis, but Vito Rugani project-managed the whole process of designing a juice facility based on the extraction process, fabricating the parts in Italy and finally a year of setting it up on their farm outside Tarlton, close to Johannesburg, by Italian technicians. “I like working with Italians, there is a meeting of minds, and I understand the language,” explains Rugani, whose great uncle came to South Africa in 1889 to join the diamond rush.

The juice facility is powered by a biogas plant, running on the pulp from the process.

His knowledge of food science – he had originally considered studying food science instead of agriculture – has equipped him well for vegetable juices which are much more prone to infection by bacteria, fungi and yeasts than fruit juice, due to its alkalinity. Vegetable juice cannot be manufactured in a fruit juice facility. For this reason his facility contains the largest steriliser in Africa and every twenty minutes a sample is taken to be grown on in petri dishes in order to see whether any pathogens have hitched a ride. None are tolerated, but to be more safe, all packaged juice is kept in quarantine for a month before released commercially; all the while batches are kept at temperatures of up to 45°C to accelerate the process of possible pathogen multiplication, thereby getting a snapshot of the product a year ahead.

One of the priciest components of his facility was the CIP (cleaning in position) section at around two million euros.

Rugani’s carrot juice is furthermore pasteurised, which is sometimes greeted with disapproval by health-conscious customers. Rugani refers to carotenoids as bullet-proof, not surprising considering their role in photosynthesis: these pigments absorb high energy, blue light to protect chlorophyll from light damage during the photosynthesis process. Beta-carotene is only affected by heat above 190°C and it’s oil-soluble; therefore the amount of beta-carotene is not adversely affected by the sterilisation and pasteurisation process.

Quite the contrary: an accidental discovery in a UK laboratory has led to the conclusion that the pasteurisation process in fact aids the trans-cis-isomerisation of beta-carotene, making more of the cis isomere of beta carotene, which is usually only present in amounts of 2 to 3% in the carrot, bio-available. Through the extraction process, followed by pasteurisation, Rugani’s carrot juice have exceptionally high levels of beta-carotene in its most useful form.

The ‘golden hour’ of the carrot

Apart from the unique process, the principle of the life force of a carrot is strictly adhered to at Greenway Farm. “There’s a lot more in a carrot than in an apple. A carrot is there to sustain life. As soon as you pull up a carrot from the ground it pulls out all the stops to stay alive and it begins the radical process of using its resources to stay alive,” Vito Rugani explains, noting that a carrot’s resources are depleted after about four days, at which point it can no longer regrow. “The whole idea of the life force is to capture it before it’s used up. We innovated the idea in South Africa when we started hydrocooling carrots, seventeen years ago. It becomes part of the institutional memory of the organisation that when they’ve been harvested, you have to get them to the packhouse as soon as possible. The carrots are juiced about four hours after they’re harvested.”

For an enterprise of Greenway Farms’ size, this takes some planning, given that their production of Nantes type carrots is spread over three farms (together annually totalling 800ha, on 2,500ha of irrigation ground on a three year rotation basis) for year-round supply. This time of the year, early summer, carrots are still grown on their farm in the Waterberg region of Limpopo Province. Volumes from Gauteng will start in November and run until February, at which point it moves south to the Free State, to Christiana, well-known potato country for its sandy soil. From July, mid-winter, carrots will again be grown up north. All of these farms are situated close to highways, for the very reason that Greenway Farms hydrocool at their Tarlton farm and all carrots need to get there before the ‘golden hour’, as they put it, expires.

“Carrot juice has tremendous nutraceutical value,” Rugani says. “How come you don’t see carrot juice all over the show? It’s extremely difficult to make because it’s an alkaline product and therefore attractive to a wide spectrum of bacteria and fungi. Also, the barriers to entry are extremely high. A juice factory’s a big investment but a farm’s an even bigger investment. The theory of the extraction process was there but nobody with the means of production had ever said: let’s do this.”

He believes his carrot juice is the only longlife Tetrapak carrot juice with a year’s shelf life, in the world. It’s doing well in Namibia and there are plans to open a distribution centre in Zambia. As for distribution further afield, Vito Rugani has been exhibiting the product at expos around the world, going to the Anuga trade fair in Germany next month. They seem to be getting some traction in the Middle East and Southeast Asia, he says, also noting that there is negative bias towards products from Africa in the USA, for instance. Locally a new deal with Nature’s Choice, prominent health food brand, will get it into more stores, while the juice is displayed with its ZZ2 tomato juice stable partner at Food Lover’s Market stores. Then there are individually managed Spar and Pick n Pay stores throughout the country where owners have taken an interest. In the Cape the juice is distributed by Henties Juices.

A stable of juices

“Our process starts with fresh product. We do business with farmers directly,” Rugani points out. He has always felt that one needs a stable of juices, and when pineapple farmers from KwaZulu-Natal contacted him because the bottom had fallen out of the pineapple juice industry in South Africa and they were throwing away “tonnes and tonnes” of pineapples, it was decided to add pineapple juice to their portfolio.

Instead of skinning the Queen pineapples with their high flesh:skin ratio, Rugani decided to chuck the pineapples whole into the extractor and out came a 50% yield, its vitamin C content measurably enriched by the inclusion of the skins. They’ve experimented with beetroot (grown by themselves) as well as ginger, and over the next few weeks they will be launching, first, a pineapple-carrot juice, followed by a beetroot juice, as well as a carrot and ginger combination, Vito Rugani’s personal favourite. A 100% pineapple juice will follow.

Rugani’s old university friend and fellow agriculture graduate, Tommie van Zyl, is MD of ZZ2 where before, oversized tomatoes or those too ripe for the commercial market would largely go to waste. Now, they go from six of ZZ2’s tomato farms in Limpopo to Tarlton where they are made into tomato juice – a juice not based on tomato concentrate as most other tomato juices.

Marketing of the tomato juice, which appears under its own ZZ2 brand, and the Rugani juices is a combined effort, both taking it to their established clients and taking the other with. The tomato juice was launched at the recent PMA Fresh Connections conference in Cape Town 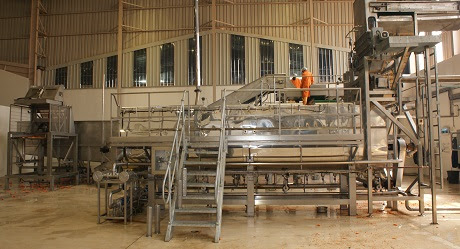