In 2012, in response to widespread labour unrest in the Western Cape, some Ceres apple producers sent a delegation to visit their counterparts in the South Tyrol region of northern Italy. The visit produced a lot of new ideas and on the way back from Italy, Retief du Toit remembers, a decision was made to establish ultra-high density apple orchards on ZZ2’s Bokveldskloof farm in the Koue Bokkeveld, and – crucially – to do it on the M9 rootstock which hadn’t become widely accepted in the South African industry.

“We learned a tremendous amount in Italy and one of the things that struck us was: why are we so far behind in ultra-high density plantings? I think there are many facets of apple and pear production where the South African industry stands at the forefront, like pest management, plant nutrition and management of the whole logistics chain,” Retief du Toit, managing director of ZZ2 Cape, says, “but most European apple producers use a narrower planting width, generally 3m or 3.2m x 0.8m, than us. In South Africa many farmers are now going for a golden mean of 3.5m x 1.2m or 3.2m x 1.2m on M7 rootstock, but we decided we wanted to take it all the way.”

“At ZZ2 we’re innovative and try ways of doing things that will differentiate us in the long term. I think our appetite for risk is quite high,” he notes. ZZ2 acquired the 112 ha-farm, where Retief’s grandfather started farming 94 years ago and where he grew up, and today the farm specialises in apples, with a further 36ha of pears and apples down in Ceres where it is warmer.

Availability of the M9 rootstock proved a limiting factor but they managed to get hold of enough M9 rootstock for 0.3ha. Fuji Kiku was grafted on the M9, a cultivar whose tendency to sunburn proved to be a valuable litmus test given the higher sunlight intensity in the Western Cape than in northern Italy. They supplemented the M9 trees with the more commonly used M7 as a control, together forming a semi-commercial block of 0.6ha, within which they used two planting distances: 3.2m x 1.2m and 3m x 0.8m. When the block was three years old, it was incorporated into Hortgro’s Orchard of the Future project.

“We’re cautiously optimistic,” says Hendrik Pohl, manager of fruit production on Bokveldskloof. “Our fears of sunburn on the M9 trees didn’t realise – there’s more incidence of sunburn on the M7 trees. Because of the size of the orchard, we’re able to pack the apples separately at our Bella Frutta packhouse in Ceres and from what we’ve seen so far, the production is higher on the M7 trees but the M9 trees outperform them in terms of colour

and size, therefore in class 1 packout percentage, as well as in input costs.”

“We have an enormous opportunity in South Africa to maximise our high value packouts. If we can move up one or two classes, from a Local 1 to an SA1, or from an SA1 to an EU1, huge value can be unlocked,” he continues. “The reason for our lower packouts on bi-coloured apples is colour and it’s got to do with the style of trees with which we farm. You can’t get those apples to colour up because they’re hanging in the shade.”

“We’re of the opinion that we can improve the colour on our bi-coloured apples with 15% to 20%. After all,” Retief adds, “we’re farming with sunlight.”

The main objective with M9 in ultra-high density planting is to fill tree row volume. It’s a shy grower and if planted too wide apart, row space will never be filled. They’re quick to point out that going the ultra-high density route is not a strategy to save costs or labour but rather to drive income. The establishment costs are high – R500,000 (€33,500) to R750,000 (€50,200) per hectare, more if the orchard is to be covered, and there is a waiting list of four to five years for M9 planting material, which is why ZZ2 will be setting up its own nursery to become self-sufficient in M9 rootstock.

“The win isn’t necessarily in the top end product of the tree,” Hendrik explains. “All orchards will eventually reach, say, 100t/ha, but what matters is how quickly you get there. The real pay-off occurs within the first six years. If you were to follow the old 1960s model of 6m x 6m rows, you only get there after 20 years. With a planting width of 3m x 0.8m, you achieve it within four years. The combination of quick bearing and high quality makes a big difference to the orchard’s income within the first six years. How long does it take you to obtain a high-value crop? With M9 you can get it in the third season.”

“From a management perspective we now focus on the tree, not the worker.”

“It isn’t a copy and paste from Italy,” Hendrik points out. “This approach demands more management inputs but its management is aimed at the tree, not at the labour force. High density does not necessarily mean less labour because when you have to manipulate 4,000 trees per hectare, as compared to the usual 1,600 trees, there are more actions to be taken.”

“The ultra-high density orchard is 2.8m high, instead of the usual 3.6m, which means there are many more actions that can be performed from ground level. Eighty percent of the crop can be picked from ground level. Each tree’s pruning requirement is less, where a conventional tree could take you half an hour to prune. And compared to the M7 – it’s a battle with the M7 in ultra-high density planting. It’s spraying Regalis, it’s girdling, pruning, thinning – the M7 rows look like a spider’s web with all the pieces of string and it just never stops. For farmers wary of taking the step of ultra-high distance planting, the M7 has a place, for sure, but at a different planting width.”

“From a management perspective you now focus on the crop, not the worker,” he continues. “The actions that need to be taken are simpler, it’s easier to train someone how to prune such a tree. It’s a completely different set of actions and there are fewer actions, so it’s easier for a worker to decide upon an action.”

“However,” he adds, “you need to have the discipline to say: okay, normally it would be time to manipulate the orchard but I’m not going to do it. It’s M9, it’s high density, I’m not supposed to bend them and eventually the orchard looks good because the apples are doing the job for you, but then you also need the courage to say: right, it’s the second year, now they have to bear a crop. So you look differently at feeding and irrigation.”

“One of the reasons why the M9 was slow to take off in South Africa is our soil. Our soil is very changeable, even from farm to farm. European soils are richer and more homogenous – trees just grow easier,” Retief says. “So I think with the M9 in South Africa there will be more demands from a management perspective, to be hands-on with all of the processes. The whole approach to pruning and thinning is new. Hendrik and our technical team almost had to re-invent the wheel. You’re talking about a whole different tree shape, your techniques differ, and with that comes plant nutrition. If the tree bears too heavily in the second year and the tree doesn’t grow sufficiently, the ratio between fruit and branches isn’t right and the tree can cease growing and you struggle for two or three years to get it going again.”

Another gambit that speaks of ZZ2’s appetite for risk-taking, was their decision almost 20 years ago to completely move away from the wholesale application of chemical fertiliser. “There are some orchards on this farm that have since 2001 not received a single drop or kilogram of chemical fertiliser,” Retief says. “Here and there we apply small amounts, but we only do it in response to what we have observed. If there’s a problem, we act, but in general we have no more problems with nematodes or apple aphid. The Bokkeveld’s soil is naturally very low in carbon. Some of the blocks stood at 0.02% or 0.03% when we started applying compost, at a rate of 20m3/ha, and now they have levels of up to 4% carbon. Bitter pit with apples is no longer an issue, skin cracking with Fuji is negligible. Our apples are some of the longest to be stored in the season and some of the last to be shipped because of the excellent internal quality.”

They call their approach ‘natuurboerdery’ (nature farming or “farming with microbes”, as Retief puts it) and the results speak for itself: the industry average for Goldens is 80t to 90t per hectare: here on Bokveldskloof the four year-average is 115t/ha. The cost of compost (manufactured at their own compost facility, Lumbri Compost, in Ceres which they set up in 2006 together with Dutoits) compares favourably with the cost of conventional pellet broadcasting.

“I am immensely grateful that we had the vision four years ago to move to the M9 and that we’ve been able to do it on a proper scale,” he concludes. “For us it’s not about using fewer people but rather to provide our workers with better working conditions. I don’t think as yet there are many farmers who think as we do about the M9 but there are a number of trials on the go. One or two large farming groups are taking it very seriously.” 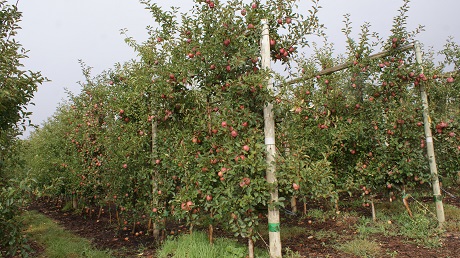 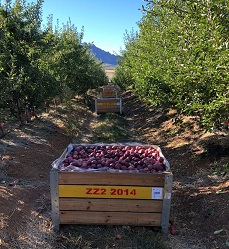 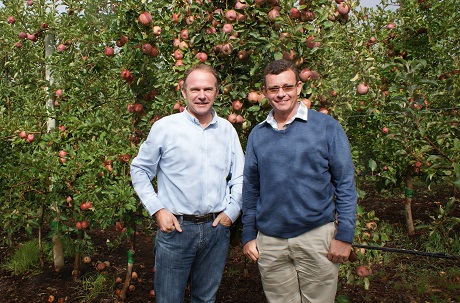